Potatoes in the New World

Here are some pics I haven't shared yet. 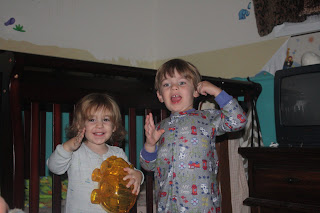 It's bedtime...holla!  Notice the peeled border in the background?  I will never again put something like that in reach of tiny fingers.  As soon as Miles could stand up in the crib he started to peel the border and when Des came along he did the same thing.  Looks real classy right?  I refuse to fix it until we move into our own house. 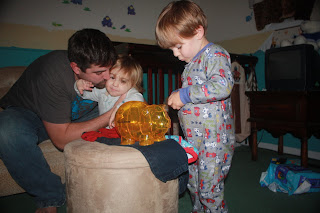 I'm feeling a sore throat and that weird swallowing thing you get when you're getting sick but not quite there yet.  Hopefully it won't go full blown because I don't have time for that.  At least that's what I keep telling my body in my head "stop it, I don't have time to be sick."

I continue to chip away at "De Orbe Novo"  and I have to say it is taking much longer to read it than I anticipated.  I usually spend 4 hours at a time at the Clements and in that time I can read about 115 pages on average.  That's 115 of the modern English translation.  Currently I am on page 294 in the modern which translates to page 94 in the actual book.  SO....there are 390 pages in the actual book.  Gonna take a little longer is my point.

Yesterday my pseudo travels took me on journeys with Vasco Nunez, who like to set wild dogs upon unruly South American natives.  Not a very uplifting topic but the reality of new world exploration is not for the faint of heart. I also read the first written account EVER of a white potato.  Of course many people still do not know that the potato did not originate in Ireland, despite the fact we associate potatoes with the Irish almost instantly.  They originated in South America!  The Spanish explorers, whose first hand accounts I am reading for my essay, were so taken by the little dirt rocks they couldn't stand it.  They called it a miraculous gift from God much like the water chestnut when eaten raw and a delicacy when cooked.  It's funny to read and try to imagine a world without potatoes, which is exactly what the Europeans had before landing in the New World.

And that concludes my history lesson for today:)