A Lesson in History Part Deux

Off to the library today... 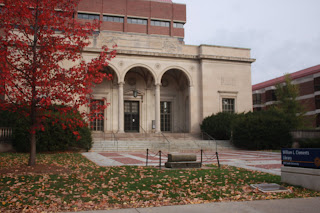 I continue to chip away at the remarkable book I'm to write an
essay on. 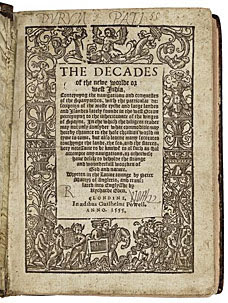 Today I read more of the third decade.  Here is one of the important things I learned:

When the natives ate they used their right hand to eat a piece of maize or bread and at the same time their left hand to eat meat or fish.  Having no napkins or cloth with which to wipe their hands they used the soles of their feet, their hips or sometimes...their testicles.  Ha ha.  Ah the new world, such a wonderous place.  How can I work this entertaining morsel into my essay?

More talk today of the fearsome dogs the Spaniards used in war, and sometimes on unruly natives.  This is just feeding my fear of dogs by the way.  Today however, Martyr gave a little background on the dogs.  They were once called Mollosians, an ancestor of what we know as Mastifs, or possibly even Rottweillers, it's not known for sure.  Mollosians were fiercly trained dogs in Epirus, a city in ancient Greece, that were used to guard flocks of sheep and also for hunting.  Eventually aiding Greeks and Romans in wars and ultimately the Spaniards who I now have the pleasure of studying

These dogs were sweet and loyal but when told to attack by their Spanish masters,by a simple finger point and utterance, they became like the hounds of hell.
Vasco Nunez used them to rip apart some grossly disfugured ( "dirty and gnarled" as he called them, so that they were "barely recognizable as human") and abusive caciques (village leaders)  who had abused their power and had raped many women and terrorized neighboring villages.  On this day I say yay for vicious hell hounds!

Peter Martyr, who is the author of all that I'm reading, back tracks a lot.  So today, even though I was reading the third decade which was taking place about 1514, Martyr skipped back to tell more of Columbus' 4th voyage in 1502.  I love Columbus.  Such a misunderstood explorer.

Despite reports to the contrary Columbus was not a violent racist.  He was very much a pacifist and tried everything in his power to bring peace to the new world.  He was smart enough to know that more could be accomplished if the natives were friends and allies who willlingly shared knowledge and information about the topography of the new world and all it's contents, rather than waste precious time at war with them.
It is unfortunate that the time period and certain circumstances made this impossible at times.  Many of the men he left at stations around the newly discovered Islands committed such atrocities that the author (having gleaned all information from Columbus himself) dared not elaborate except to say that they were more savage than the native cannibals.  Yes, cannibals...they were rampant in the new world as well.
Columbus had to spend a good deal of time defending himself to Isabella and Ferdinand also, as there was no end to the usurpers who wanted to see him fail and would send letters to the King and Queen claiming falsehoods about poor old Chris.  Doing so in person meant sailing all the way back to Spain (around 26 days voyage) and then spending time home followed by stocking up and organizing a return trip.

A map of the four voyages of Columbus
Think of all the valuable time lost, thank God we have modern communications such as cell phones, land lines, e-mail, UPS, Fedex etc 🙂
And that concludes my short history lesson for the day. xoxo 😉 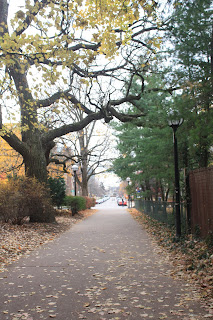 My view on the way to my car.  Even on a dreary day like today it's still a beautiful.

6 comments on “A Lesson in History Part Deux”