Of Ocean Currents, Pearls and Such

I often wondered why the voyages of early explorers seemed to be so haphazard.  Granted, to begin with they didn't have a destination because they didn't even know what, if anything, was out there. But on return voyages it would seem their lines of travel would have a little more purpose and direction. Today I learned why they didn't, or rather why they did but it just didn't look like it.

Ocean currents prevent ships from sailing in a direct line, in fact one current was so strong, near what is modern day Antigua, that it took them the whole day to sale one mile.  Yikes, sounds like traffic on 696 🙂
This fact would be obvious to any modern day sailor, and I confess I did know about ocean currents I just never gave a second thought to how they affected travel, only to how they affect the weather.

(image courtesy of learner.org)   It's dizzying isn't it?  Makes me feel like I'm being flushed down a toilet.

Amidst these choppy waters was a group of Islands referred to as the Margarita (this is how it was written in the book), which is the latin form of the Greek word Margarites meaning 'pearl' (that's for you my dear sister-in-law:)  This island was so full of pearls that it drove the Spaniards nuts and they would send home barrels of them weighing hundreds of pounds to the King and Queen.  HUNDREDS of pounds! The natives of course didn't care because pearl and gold held no value to them other than ornamental. Plus there were so many they knew the Spaniards couldn't possibly deplete the supply...right?

Moving on, today I learned of a species of giant fish called Manati by the natives.  There was a story of a fisherman who caught a baby manatu in his net.  Apparently these creatures were very intelligent and loved the company of men, so the fisherman kept this particular one, feeding him Yucca and special bread for several days at which time he put the Manatu, which he now called Manu, into the lake by his house.  From then on whenever the natives would go to the shore and call out to him he would come up hoping for yucca or some other treat.

If you hadn't figured it out from the get go this animal was actually a Manatee:)  I'm embarrassed to say despite the obvious phonetic relationship between the words and the spelling being essentially the same it took me a while to figure this out.  The description of the animal was as follows; a large animal like an elephant, shaped like a turtle but without a shell and with a head like a bull.  I spent so much time trying to imagine if they were describing the Loch Ness monster I couldn't see the answer staring me in the face:) Deep in my research was I;)  My mind is way too sci-fi for it's own good, but I digress... 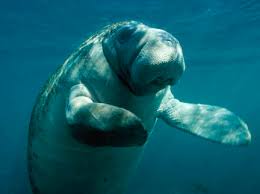 Who wouldn't want one of these?

This cute sidebar is a rare occurrence in the chronicles of the new world.  Martyr goes on to talk about how the natives, despite the king having declared them all free, were still being forced to work in the gold mines and, being unnaccostomed to hard labor, were dying in large numbers.  Those that didn't die were either extremely ill or took drastic measures (women used herbs to induce abortion so their children would not be forced to live a life of servitude.)

It isn't known for sure what the original population of Haiti and Cuba were, estimates of 12 million seem unlikely, but whatever it was 25 years after the Spaniards arrival the population had shrunk to 14,000.  Between 1507-1513 it shrank from that to 4,000, and by the year 1750 not a single native remained. (MacNutt, 1912)  They essentially were worked into near extinction.  I say near because even though it is stated not a single native remained many of the Spaniards took native brides and had children.  So they live on in that sense.

Before you feel too bad about what happened to these people remember, these natives were tortured, extorted, enslaved, murdered, eaten, sacrificed and oppressed by each other long before the Spanish arrived.  I only point that out because it would seem a serene place until the Spanish came and ruined it but that's not entirely the case.

While 'bringing Christianity to these poor souls' may have been the mantra of the Spanish the truth was they stayed and conquered for gold, pearls, silver etc...and by doing so at the point of a sword they have forever stamped themselves as oppressors.  It doesn't help that they convinced natives the reason they were all getting sick from the diseases the soldiers brought to the new world was because the hadn't converted to Christianity.  The story isn't simply black and white but many shades of grey. (image courtesy of New World Encyclopedia)  Sorry if this is disturbing but this is reality.  It was not a serene place.

Thus concludes my history lesson for the day.  Stay tuned for a change in topic as I post numerous pictures of cute babies:)  xoxo