I left you hanging with the last post and the promise of tales of monkey armies and Cortez to come. Since then I have been consumed by holidays, travelling, babies and finishing the rough draft of my essay. With all those behind me now I have a moment to make good on at least one part of that promise and hopefully entertain you with a strange tale encountered amongst the pages of 'the Decades.'

There is no better way for me to put forth this tale than to simply provide the passage itself for you to read.

"Many amusing things might be told about the monkeys, but they are also dangerous in the mountains the governor, Pedro Arias, has crossed, and which he daily renders more accessible by breaking down the rocks and burning the dense forests. The leaders of the monkeys (for they march in troops and are not courageous when alone) call together a great multitude of different breeds when they see a band of white men approaching, and give vent to horrible cries, springing from tree to tree, following the men wherever they can and amusing them with a thousand gestures and grimaces, especially the longtailed monkeys. Sometimes they descend almost to the tree-trunks, but as soon as they see preparations made to attack them with bows or firearms, whose power they understand, they re- mount to the tops of the trees with the rapidity of the wind, uttering furious cries and gnashing their teeth. 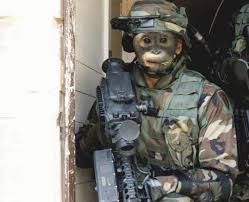 They are so quick that they are able to escape the arrows shot at them by seizing them on the wing, as though they were being offered to them; but they are unable to avoid the projectiles of firearms. It is consequently by means of these latter that many monkeys are killed, especially the little ones which are less careful. Whenever they see one of their number stricken to the earth wounded and about to be captured by our men, they tremble and lament so loudly that the air is filled with their complaints. They make more noise than a thousand roaring lions or whining tigers. Here is a sufficiently curious detail. Each monkey, when he climbs a tree, takes as many stones as he can carry in his hands and mouth to throw from the top branches when the Spaniards stop to shoot at him with their bows or muskets.

One day an archer aimed his arrow at an old female with a very long tail. The animal feigned not to see it, half closing her eye; but hardly had the arrow left the bow than she severely wounded him in the face with a stone, which broke his teeth. The unfortunate beast was punished for its cunning, for the moment the stone dropped the arrow killed her. She was eaten with great satis- faction, for did the men not eat toads or still worse, when driven by the pangs of hunger?"

Maybe it's just me but I felt such emotion when I read this tale! The animals marching together against the invaders, the old female knocking the teeth right out of the soldiers mouth (seems like justice doesn't it?) You were pulling for the monkeys weren't you? Mad when you read the female was killed and eaten? Sad to hear the little ones were shot? Me too. The Decades will do that to you, tug at your emotions and make you feel frustration, remorse, anxiety even, over events long past.

Though I am done with the rough draft of my essay the decades have forever changed my perception of history, not just the events that transpired during the New World explorations but history as a whole. How many years have I believed a history taught to me only to find parts false? Howabout not known things at all that seem critical to any human being seeking knowledge of history? Especially the history of the Americas. Everyone should know this stuff, this book should be the required text and reading of _____ grade. (Take your pick of age level:)

I may reveal more of the book in future posts but most likely I am done recounting the Decades of the New World. I hope you enjoyed the little bits that I shared in this blog and that you have a better understanding of the events that transpired to bring us all to his land. Thank God I was born in 1978-
My next project is working on letters written by Lincoln and Washington so stay tuned. Who knows what I'll uncover:)